Hey everybody, and welcome to the second installment of the “Game Designer Spotlight” series. If you haven’t yet, check out the first entry – on famed Nintendo designer Shigeru Miyamoto. Today’s spotlighted designer – Reiner Knizia – was chosen through a Twitter poll on the RemptonGames twitter page – this is my first time doing a poll to pick an article topic, but is something I will probably do more in the future so definitely follow me there if you want to be involved in that! Now, lets get started!

Reiner Knizia is a very interesting figure for a number of reasons. He is one of the most prolific and innovative board game designers of all time – having reportedly published over 600 games in his 30+ years of designing board games. He has been at least partially responsible for spreading a number of trends in board games, including sparking interest in cooperative board games with the game “Lord of the Rings” in 2000.

Knizia was born in Illertissen, West German in 1957. Although Knizia says he has been designing games since he was a child, he hasn’t always been designing games as a career. According to an interview with “AndHeGames”, he actually considers board game design to be his “third life”. His first life was his academic career – he has a PHD in mathematics, and worked on studying, researching and teaching mathematics.

His second life was his management career, where he ended up running a large mortgage company with around 300 employees, which was reportedly worth around 10 billion euros. However, he left this job in the mid 90s to start his third life, working on game design full time. At that point he had already been publishing games for over a decade (one of his earliest designs – “Complica” was published in 1985).

Since then, Knizia has been publishing games at break-neck pace. If you spread his 600+ published games out evenly over his ~33 year career, this means that he is releasing a new game roughly every 20 days! If you are like me, it is difficult to imagine how one person could possibly crank out so many games so quickly.

Equally impressive as the number of games designed, however, is just how successful his designs have been. According to his official website, his designs have sold more than 20 million copies total, with Lord of the Rings alone selling over a million copies. His games have also been translated into over 20 languages, and have been sold in countries all over the world.

However, his designs have not just been commercially successful, but critically as well. Knizia has won pretty much every award out there for board game design. He has won the Deutscher Spiele Preis (German Game Prize) award 4 times, which is a highly prestigious German prize given to “gamer’s games”. He has also won the Spiel Des Jahres, or “Game of the Year” prize in 2008 for his game Keltis, which could be considered the “Academy Award” of board game design. 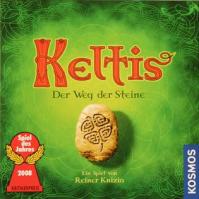 When seeing the number “600 games”, perhaps your first question might be “where do the ideas come from?” However, according to Knizia (in an interview with Mental Floss) coming up with the ideas is actually not the difficult part. It is turning that idea into a fun game that can be the challenge, and for this Knizia has a 3-step process.

The first phase is actually coming up with the idea. Knizia says that he always tries to come up with an idea based on something new – whether that be a new licensed character, a new theme, or a mechanic, component, technology, etc. He claims that doing so makes the design process “uncomfortable”, and that it is this discomfort that forces him to be innovative and come up with new ideas.

Once he comes up with a new idea, he tries not to get too attached to it. Whenever you come up with a new game idea it will probably sound really enjoyable in your head, but you never really know if it’s fun or not until you actually sit down and play it. This brings us to the next phase – prototype quickly, and playtest often.

Knizia tries to go as quickly as possible from the idea stage to actually getting his idea down on a table with his playtesters. Since he has been designing full-time for over 20 years at this point, he has a large number of very dedicated and talented playtesters to work with, and he meets with a different group of playtesters every day. It is during this playtesting phase that ideas are made or broken.

One of the most important things to do at this phase, according to Knizia, is to keep your eyes open and be critical about your idea. Be prepared to let the idea go if it is not working, because there is no point in wasting time on a bad concept. You can always come up with more ideas, but you cannot get back lost time.

Even if the game is fun, it will often undergo large changes between playtests. These changes are often large at first, and as the playtesting progresses they will become smaller and smaller – eventually just minor tweaks to numbers here and there. Once he considers the game to be ready, he moves on to the third phase.

The third phase involves leaving the game alone for a month or two and getting some mental distance from it. After the game has been sitting for a while, Knizia will take it back down and playtest it a few more times. If it still holds up, then it is ready for publishing.

The above describes Knizia’s design process, but not really his design philosophy. A big part of what sets Knizia apart is not just the process of making games, but the ideas and concepts that underlie his designs. While it can be difficult to pin down exactly what makes a “Reiner Knizia” game, as he has made such a large variety of different types of games from two-player card games to a live-action RPG, there are a number of elements that do show up frequently in his work.

One of the biggest features of his designs is the focus on simple principles and rules. Although Knizia says that he often starts designs with a theme first, many of his games end up feeling abstract due to his focus on simplifying and abstracting the theme as much as possible.

Often the goal of the design is not to perfectly mimic a particular experience, but to mimic the thought-processes that may go along with a particular theme. An example of this is his game “Modern Art”, in which players buy and sell different pieces of art to eachother or the bank. This game has a very simple rule-set, yet these simple rules are enough to get players into the right frame of mind that make the game feel like an authentic art auction.

Another major feature of Knizia’s design philosophy is the way he views the design process itself. Although he has a background in mathematics, and sometimes uses mathematical models to aid his design, he does not believe that a math background should be necessary to design or to play board games. He sees game design as an art, not a science, and because of this he tries not to lean too much on any particular skill, such as his mathematics knowledge.

The last main lesson that can be taken from Knizia is the importance of knowing the entire process of making games. Knizia is an expert in not just the design of games, but also in working with publishers, production concerns, and how to sell/market games all around the world. Knizia works as a freelance designer, and is not tied to any particular production company or distributor, and therefore he knows that he needs to have a well-rounded view of the entire industry.

As an example, Knizia sells games in both Germany and the United States of America, and in his Mental Floss interview he articulated a major difference between the two markets. According to him, America puts a much larger focus on the theme of the game, while German players care more about the mechanics of the game. He says that American players do not want to buy a new game if they already have one with the same theme, even if the mechanics are different. German players, on the other hand, will not buy a game that uses the same mechanics, even if they have very different themes. As the board game market becomes more global and less centralized, it is important to be able to design and sell games all over the world, not just in your local market.

That is all I have for this week! I hope you enjoyed this game designer spotlight! If you did, check out the rest of the blog and subscribe on Facebook, Twitter, or here on WordPress so you will always know when I post a new article. If you didn’t, let me know what I can do better in the comments down below. Also, if you have suggestions for future game designers that you believe deserve their own spotlight in a future entry, please let me know on Twitter! And join me next week, where I take a look at how to break the boundaries of game design!