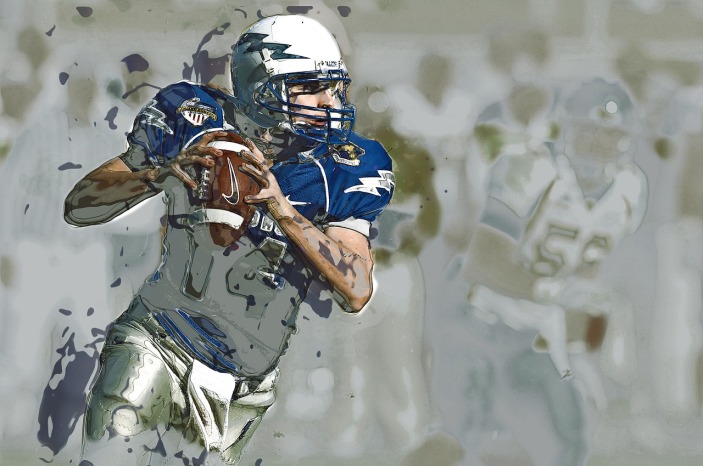 Hey y’all! It’s been a few weeks since I’ve been able to write an original article for this blog, but I am finally back. I really enjoyed my wedding and my honeymoon, but I also really missed writing for you guys. Luckily, I am back in the swing of things so you can expect new articles every Thursday again for the foreseeable future.

This week I decided to tackle (pun intended, as always) a very common problem in many cooperative games, namely the “quarterbacking” issue. In this article I hope to look at what quarterbacking is, when it can be an issue, and some solutions that different games have come up with to combat this issue.

In most games, the objective is to outplay the other players at the table in order to emerge victorious. In a cooperative game, on the other hand, all players work together to achieve a common goal. In these games, the game itself is the opponent, and the players have to solve problems together. These games tend to be all or nothing – either all players win, or all players lose.

Because everybody in a cooperative game is on the same team, they tend to rely on on communication and cooperation between all of the players. Sometimes, however, one player at the table decides to make all of the decisions for all players. This can occur because that player has more experience with the game and knows all the best moves, or perhaps they just have that type of personality. Either way, this is what I will refer to as “quarterbacking” throughout the article – one player that is attempting to make all decisions for the team.

The short answer is sometimes, but not always. The term “quarterbacking” obviously comes from football, where the quarterback is often the leader of the team and responsible for calling the plays. In this type of game it is extremely important that every member of the team is all on the same page, and the huddle is really the only chance that the players get to communicate with eachother. Because of this, it is imperative to have a strong leader capable of making quick decisions for the entire team, and trusting that team to carry out those decisions.

Where quarterbacking tends to become an issue is when it gets severe enough that other players don’t feel like they actually get the chance to make their own decisions. In the most extreme cases the game can devolve to the point where it might as well be a solo game, with one player making all of the decisions for all players. While the quarterback believes that they are helping the team to win the game, it can remove all of the fun of the game for the rest of the players. I would say that if a game often results in these types of situations, that is a very bad thing.

When preparing for this article I started discussions online to try and gather examples of games that have unique solutions for the quarterbacking problem. In these discussions, one of the most common responses I received was that quarterbacking wasn’t a problem with the design of the game, but instead was an issue with the players themselves. Basically, I was told that if a player couldn’t play a cooperative game without quarterbacking then it was up to the other players to stop them, and if that doesn’t work then they should just not play cooperative games with that person.

While there may be some situations where a specific player is the problem, I would say that if a game often leads to severe quarterbacking that it is a design issue. A game designer is designing more than just a game – they are designing an experience for the players. In doing so, I believe that it is the designer’s job to design their game in such a way that the correct strategy is also the fun strategy. To the quarterback, taking control of the game may appear to be the “correct” strategy because it increases their chances of winning, but for the rest of the players it is not the fun strategy. In the same way, if the quarterback is forced to keep their thoughts to themselves that can make the game less fun for them.

Because of this, I believe that it is important that designers construct the game in such a way that quarterbacking is either very difficult, not the most effective strategy, or otherwise discouraged. Over the years, game designers have come up with numerous strategies in order to combat this issue.

Note that not every game needs every one of these solutions, and some may not need any at all. After all, the goal is to make the game fun and in some cases adding extra rules that don’t make sense  with the rest of game can make it less fun. Because of this, it is very important to find the particular solution that works best for your game mechanically and thematically.

In this section I am going to be taking a look at a number of different methods that have been used to eliminate or mitigate the quarterbacking issues in different games. I’m sure I won’t be able to hit every possible solution, but I’ll try and examine all of the most popular ones. Without further ado, lets jump in!

One common way of eliminating quarterbacking is simply to have so much going on in the game that it becomes impossible for one person to keep track of it all. This method is used in games such as Gloomhaven, Space Alert and Mechs and Minions, where each player has so much going on that it becomes nearly impossible for one person to keep track of everybody else as well. As Reddit user AmuseDeath succinctly put it: “Anything that is solvable by a single person can and will be solved like that”. If that player solves the problem and tells the group, they become a quarterback, but if they keep it to themselves they can feel resentful. The solution? Make the problem hard enough that it takes a group to solve it.

Another option, which works well with the method discussed above, is to have imposed time limits for certain actions. The idea behind this concept (which is used in games such as Bomb Squad and Space Cadets) is that even given a very complicated problem, a single player could figure it out if given enough time. By limiting the amount of time allowed to make the decision, the game eliminates this possibility and forces each player to make their own decisions.

One explicit way to discourage quarterbacking is by deliberately limiting the players communication options. This can be as extreme as completely banning all table-talk, to simply not allowing players to reveal certain pieces of individual information (such as what cards are in your hand) to banning a few words or phrases. This method is pretty straightforward – if you don’t want somebody telling everybody else what to do, simply say in your rules that they can’t.

Usually this method goes hand in hand with some sort of hidden information that not all players  have access to. After all, if all the information is public then the quarterback could still find the correct answer, and they would just get frustrated because they couldn’t tell the group. In addition, having hidden information is pretty pointless if all players are simply allowed to tell the other players what they have. This method is used effectively in games such as Hanabi, Magic Maze and Bomb Squad.

One note about this method: if the mechanic is not integrated effectively into the theme of the game it can seem very forced and “tacked on”. Because of this, I believe that designers should be wary of choosing this method without a good reason, as arbitrarily not being able to speak can lead to a lot of frustrated players. That being said, if this method is integrated into the core of the game it can be a very useful tool.

One of my favorite ways that games have discouraged quarterbacking is by having one player be the “traitor” that is secretly working against the team. This reduces the effectiveness of trying to control the game because the players cannot completely trust eachother, and trying to control too much can be seen as suspicious. While games that use this method are no longer purely cooperative, I do think that it adds a really interesting dimension to the games, even apart from discouraging quarterbacking. Games that use this method to great effect include Battlestar Galactica and Dead of Winter.

The final solution I will be looking at today is having so much content in the game that every game plays out very differently. Oftentimes a quarterback tries to control the game because they are familiar with it and know it very well. In a game with a lot of variety it can be difficult for any player to become familiar with all of it, and therefore make them unable to quarterback.

There are a few different ways to achieve this. The first method – randomization – is used by games such as Betrayal at the House on the Hill. In this game, not only does the house itself unfold randomly but there are roughly 50 different “haunts”, each of which provide a different gameplay experience. It would take a long time for a player to become familiar with all 50 different haunts, and this lack of familiarity can at least mitigate the effectiveness of quarterbacking.

Sherlock Holmes: Consulting Detective uses a similar method. Basically, every game has a group of detectives attempting to solve a mystery by finding clues, and then answering questions in a quiz book. Each case is pretty much a one time thing – once you solve it, you know the solution. Luckily the game has several different mysteries and expansions that add variety and keep any player from knowing all the answers.

The final way to accomplish this is through the Legacy mechanic. Legacy games have the unique design element of permanently changing from one session to the next, which has the effect of keeping it fresh longer and preventing players from learning all the best solutions.

That’s all I have for this week. I hope you enjoyed this article on quarterbacking in cooperative games! If you did, you can always follow this blog on WordPress, Facebook or Twitter at RemptonGames so that you will always know when I post a new article. If you hated it, you can always leave a comment letting me know what I could do better in the future! And join me next week, where I talk about the game design lessons that I learned during my recent Honeymoon at Disneyworld!